This month fellows of the UBC School of Journalism’s International Reporting Program are traveling throughout Turkey reporting on the ongoing refugee crisis. Below are notebooks from our reporters in the field.

Our team is chasing the sunset up a winding road in Kayseri to film Shahba Shakrukhi against the city skyline.

Shahba just arrived in Turkey on a tourist visa, after her activism led to the Taliban threatening her life. She’s here deciding if she will register as an asylum seeker, stay unregistered in Istanbul with her friends, or leave the country by other means. None of these options are necessarily good.

It’s only the second day in Turkey and it already seems ridiculous that we’re only reporting for ten days. There are so many stories here that we won’t have time to tell.

Once we’ve set up the gear, I take a break to go stand with Berat, our Turkish reporting partner, fixer, guide, and now, our friend. Berat’s been a war correspondent and has reported on Turkey for years. He’s also been a fixer for international teams like ours time and time again.

Berat tells me about his experience reporting on Syrian families in his home city of Izmir. He says one international team questioned his decision to stay connected with the people he reports on. He says he responded with a parable about a writer who lived in a tower on the beach. Every day, hundreds of star fish washed on shore, and every day he went outside and threw one back in. When people asked him why bother, when so many starfish are left out to dry, he said, “because I helped one star fish, now he has a chance.”

After that, Berat says, his critic shut up and agreed with him.

It feels like there are too many starfish on the beach to count right now. There are a lot of stories we won’t be able to do while we’re here, but the best we can do is focus on the individuals in front of us.

I spend the next day with Shahba. We walking around Kayseri getting to know each other. We talk about our families, what we have in common and I find myself listening to her talk about why she chose to leave Afghanistan.

We step into a shop and she asks me to help her pick a new hair clip. I notice near the bottom of the rack there’s one decorated with a starfish. She picks a flower for herself. It looks perfect. 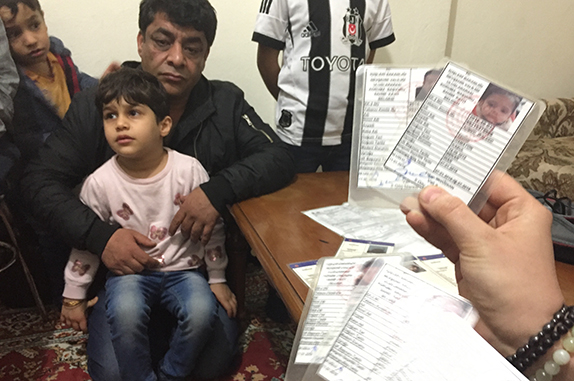 Interview with Afghan refugees who lost family members when their boat capsized on the way to Greece. They lost six of their loved ones, including an infant and four children. 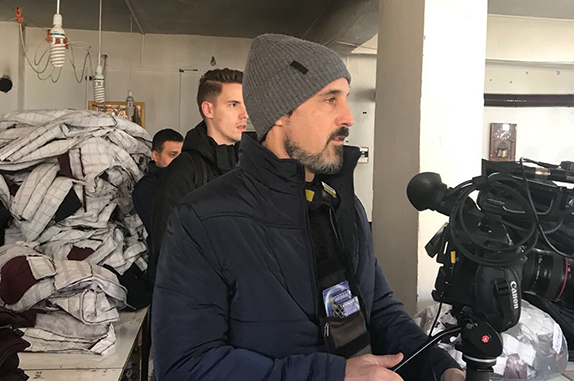 Shooting in textile sweatshop where refugees make jackets in Kayseri. 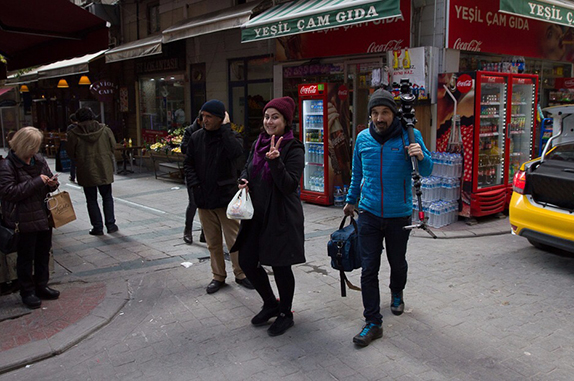 Getting to an interview in Kayseri. 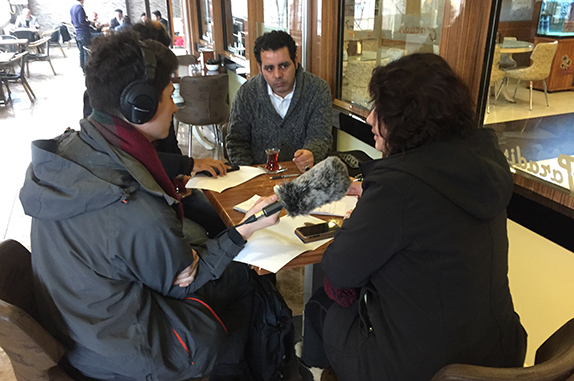 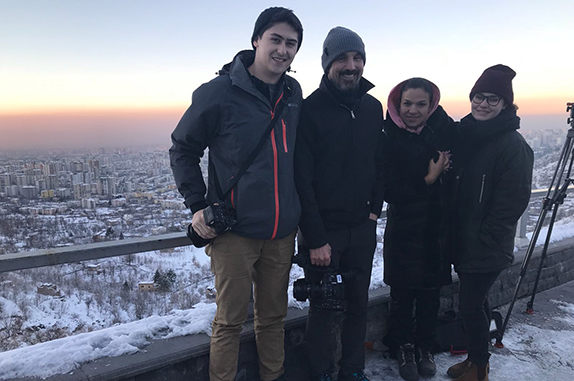 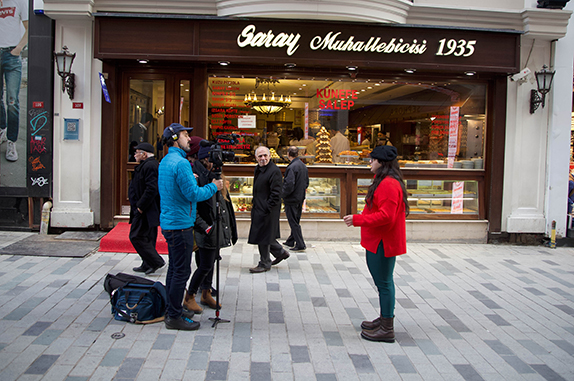 It’s not hard to get noticed in Istanbul’s Taksim Square when you’re a six-person crew lugging around filming gear. But it was the subject of our shoot that drew the most stares.

Amir Hossein is a 20-year-old gay Iranian man. He bought his outfit the day before just to make sure we wouldn’t miss him: a bright red sweater, green leggings, boots and a black beret, sitting atop his long, wavy black hair.

“Is he a celebrity?” asked a passerby. It depends who you ask. In Turkey’s LGBTQ refugee community, Amir Hossein is known for his activism and social media presence. In the square, he’s a strange entity. We watched packs of men scrunch their eyes and try to make sense of his appearance. Some whipped their heads back to get a second look.

All the attention made me uneasy. I wanted to distance myself from the group even as I realized none of the stares were directed at me. Amir Hossein was at the centre of the scrutiny. He stood tall like a statue in front of the camera. He didn’t whisper; his voice rang in the streets and passersby could make out his words. “I’m not a man and I’m not a woman,” he said. “I’m Amir Hossein.”

It’s not easy to make that kind of proclamation anywhere. But here in conservative Turkey, where LGBTQ rights are waning, it was an act of courage and defiance.

We’ve spent the better part of a week in Kumkapi. It’s been eye opening.

The neighbourhood is such a stark contrast to everything that surrounds it. There are big name shops like Vodaphone and Koton (Turkish chain store) lined up beside overpriced tourist restaurants and mid-range hotels. When you walk 100 metres behind these places it is a completely different world.

The buildings in Kumkapi are run down. Buildings appear to tilted. The streets are narrow and bumpy. You see the occasional bullet shell wedged between the cobblestones.

It’s mostly quiet during the day, with most store fronts not even open until 11 in the morning. Tifa, our fixer, says it’s because the people who live here don’t have jobs. They sleep most of the day.

In the afternoon, the area starts to wake up slowly. People emerge from behind metal-plated doors, heading to the mosque for afternoon prayer or to do some shopping at the local stands.

But everyone seems wary. They watch us. Two foreign young women wandering their streets. We seem to stand out among and array of humans. You can see anyone in Kumkapi, from Syrian women and children begging on the street to African migrants toting cargo on their backs from one spot to the next. Come sun down, the area comes alive. Venders line the crowded streets, Ethiopian cafes are packed and African hair salons buzz with business.

It’s definitely not your standard Istanbul. Tifa, our partner, tells us its time to leave.

Today was a full day of interviews. we met the Imam of the main Mosque in Kumkapi. He was open to our questions and willing to talk. From there, we visited ASEM, a clinic that helps African migrants and then finally we spoke to a smuggler.

The smuggler seemed paranoid. He considers himself a helper. Someone who takes people from Turkey to Izmir or to the border with Bulgaria. As I listened to him, I found myself struggling to wrap mind around the fact that this man had helped to smuggle hundreds, perhaps thousands of refugees through this place. We were restricted in what we could do. No photos. No video. We tried and failed to persuade him. This has been happening a lot. People are fearful and we understand.

We finally left Kumkapi for the day! We now know the area so well in Kumkapi that we could literally walk circles around it. It’s definitely not the most beautiful area of Turkey but you can tell it thrums with migrant stories just waiting to be told. But for today we went to the satellite city, Yalova, to meet Jean- Christian from Congo-Brazzaville.

Yalova itself is a sleepy beachside town. Everywhere we went in town people would come and greet Jean-Christian. Although there have been plenty other African asylum seekers sent to Yalova over the years, only Jean-Christian lives there, the others only come back every couple weeks to check in but live in Istanbul. This isn’t an option for Jean-Christian. Big cities traumatize him. They remind him of home and the massive explosion in the main city of Congo-Brazzaville that injured him and killed two of his friends. He survives living a quiet life up in the hills above Yalova. He struggles financially as he cannot get work as a disabled person. He gets some support from the UNHC, but he struggles to pay his rent. He depends on his generous Turkish landlords.

Unlike most African migrants we met, Jean-Christian wanted to talk. He allowed us in to his home and gave us access to electricity to power our gear. I worried about how much more expensive his bill would be after our visit. This man who has so little gave us so much.

In 1993, I flew in a small Cessna with a group called Hermanos al Rescate (Brothers to the Rescue) reporting on their search for refugees trying to make the dangerous trip by rickety rafts from Cuba to Miami. Twenty-five years later, I’m in Turkey reporting on a similar phenomenon – desperate refugees from places like Iraq, Afghanistan and Syria who have left behind their homes and risked everything for a new life.

This cemetery of nameless graves in Izmir holds the bodies of hundreds. Refugees who died trying to cross the Aegean Sea, but never made it. They are people whose identities are unknown and their families are left wondering what happened. Are they dead or alive? Are they in a camp somewhere? Were they injured or have they gone on to seek safety abroad never able to reach back? A few lucky families do eventually find their relatives, and graves like this one finally mark their deaths with names instead of numbers. 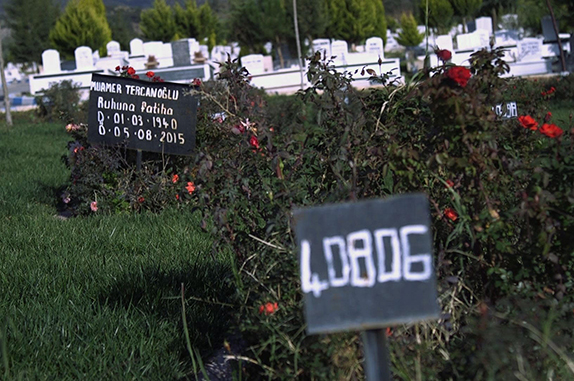 There’s an easy way to help these families. Through DNA testing, the genes of recovered bodies could be cross-referenced against family members with missing relatives. But politics and bureaucracy make it nearly impossible to run these tests – one of the many ways people remain “stuck” in Turkey, sometimes spending years searching in vain for missing parents, siblings, spouses and children.

In the 1990s, thousands of desperate Cubans were lost at sea, and as a journalism student I felt compelled to tell their story. A quarter century later, we’re seeing an even great tragedy unfolding, and I’m proud to be with my own class of journalism students reporting on the worst refugee crisis in recent history. 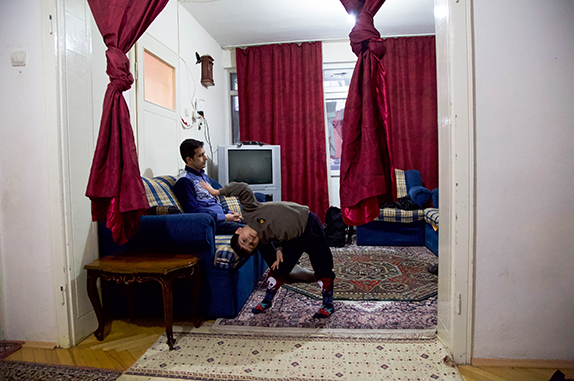 I met a couple of remarkable children in Ankara.

The first was Rahim, a six-year-old Iraqi boy with a toothy smile and big energy. During our visit, he raced to the kitchen to help his mother serve tea and darted back to the couch to sit beside his father. He looked up to his father with great admiration you could see in his eyes. Rahim was a natural in front of the camera. When I pointed my lens, he would break out in a smile and flash me the peace sign.

At dinner, I asked his father, Abjer, about Rahim’s favourite things to do. Abjer sighed. “Rahim is a fighter,” he said. “He plays with toy soldiers all day and pretends he’s in battle. I’m worried the war has affected him.” I stared at Rahim, who was scarfing down a plate of rice topped with lamb. This boy seemed so pure and untouched by the ravages of war. But trauma, as I’ve learned, plays out in curious ways.

Then there was Ferdoz, whose smile melted the rock-hard exterior of our fixer, Berat. Ferdoz has William’s Syndrome, a developmental disorder that causes distinct facial features. At six years old, she only knows a few words. But her personality is unmatched. She sat beside us during the interview, scrutinizing my camera and Berat’s thick beard. Her joy filled the room.

Both children – Ferdoz and Rahim – have suffered. Both displaced from their homes and cultures. Both learning to appreciate the small things (Rahim’s play space is a tiny corner with two toys in a frigid living room). They smile. They laugh. They approach strangers like me with curiosity and warmth.

I wonder how their displacement will change them. How they will be treated by society later in life. What will that do to their kindness. Will they still smile at strangers?